So, it's been pretty quiet on the F.B.N front (mostly because I'm fucking lazy) but I've got some kick-ass band submissions to throw your way very soon, as well as some more awesome downloads - as soon as I get around to writing up the reviews. In the meantime, go check out my new solo project! 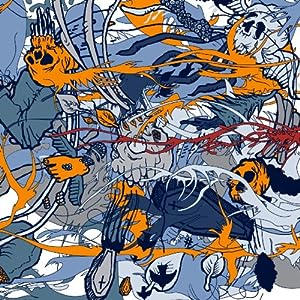 
Tusk are a sadly defunct band with members who now play in Pelican, though the two bands couldn't be further apart. Tusk trade Pelican's glacial pacing and dense soundscapes for a barrage of blastbeats, savage riffs and shrieked vocals. Keeping the ferocity and brutality of grindcore, injecting it with the complexity and precision of mathcore and giving it a healthy dose of hardcore and metal energy; this release ducks and dives through chugs, tremelos and sudden tempo shifts. This is an utterly pummeling album, though one that does not sacrifice intelligence and variance for the sake of meatier riffs and pointless breakdowns. This band has described their sound as 'Discordance Axis by way of Yes's 'Close To The Edge', and if that doesn't intrigue you, than you cannot be helped.

(Note: This is the 2005 release of the album, so it comes with a few extra live tracks. Neato!)

Email ThisBlogThis!Share to TwitterShare to FacebookShare to Pinterest
Labels: Grindcore, Mathcore, Tusk
Newer Posts Older Posts Home
Subscribe to: Posts (Atom)
FEAST YOUR EYES (AND EARS, MOSTLY EARS) UPON FUCKED BY NOISE.
A BLOG FOR THOSE OF YOU WHO ENJOY MUSIC SUCH AS THIS:
- Punk
- Noise Rock
- Hardcore
- Industrial/Power Electronics
- Black/Death/Thrash Metal
- Art Punk
- Powerviolence
- Grindcore
- Post-Punk
- Goth/Deathrock
- Experimental/Avant Garde
And many others!
It goes without saying that we encourage you to purchase physical copies and support the artists whenever possible (unless they're nazis or something).
I've been locked out of the old submissions inbox, so I will be setting up a new one. When that happens, feel free to use that email for all inquiries, requests or submissions, to report a broken link, or if you're an artist/label and you wish to have your music removed from this site.
FACEBOOK