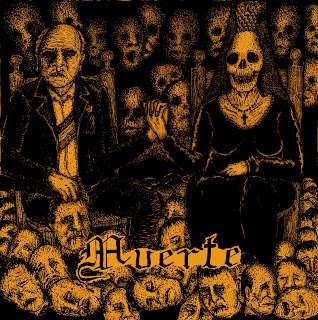 Oh man, two deathrock bangers in one week! This is something I've been looking forward to since 2013 when Muerte dropped their demo, and something I've been even more excited for after seeing Muerte play last year at one of their few US shows. Well, it's here and holy fuck, it does not disappoint. This thing has thrills and chills, stomp and speed; all of which is smothered under a bleak and dark atmosphere.

Muerte is a relatively new band from Mexico City, featuring some of the people who brought you Inservibles, Tercer Mundo, and others. However, instead of playing the noisy punk of Inservibles or the unrelenting raw punk of Tercer Mundo, Muerte has decided to go the deathrock route. That's not to say this release doesn't draw from those other things; in fact I'd say it reminds me a little of a darker version of where Inservibles were on their LP and final 7". I feel that's a lazy comparison to make, though, since shared band members don't necessarily mean bands are comparable.

On this release, you'll definitely hear a lot of influence from Italian deathrockers Nerorgasmo, who are probably the inspiration I hear coming through the strongest. I guess that makes sense, since Yecal Peña, the guitarist/vocalist of Muerte and Inservibles showed them to me and spoke of them in very high regards. What that means is you should expect nasty snarled vocals accompanied by an unhealthy dose of suffocating and evil guitar work; all held together by tortuous bass lines and powerful drumming. For all you non-goths out there (you should be ashamed of yourselves), don't worry about this being soft. As I said there is still plenty of raw punk influence, and when it rages, it fucking rages. Plus, if you've read anything I've said before, you know I hate boring modern goth.

Turn off the lights, close the curtains, and get fucking freaky. And if you're in the US, catch Muerte on their summer tour with The Coltranes and Lotus Fucker!