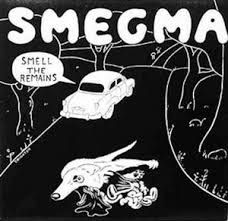 Smegma is an unpleasant human dairy product created by the churning of unwashed genitals. It's also the name of a fabulous 'Los Angles Free Music Society' group founded in 1973. Since then There have been over twenty members of Smegma most with names like 'Cheesebro' and 'White Mohammad' who's actually present on this recording. The First song on Smell the Remains, 'Potatoe war', sound like Sun Ra making meme music but it gets much better after that. For every faux apathetic band of carefully manicured tumblr kids like 'Teen Suicide' There's a member of Smegma with actual disinterest. Nothing on this album is musical. Smegma's main sound resembles Naked City 'Do Re Mi Fa'ing their instruments before a show but there's also some early 'noise' on the track Beauty School (quite possibly just a metal trashcan being abused) along with tribal drumming, Plunderphonics, some disembodied Ho-down style thumping which seems lost (it was probably meant to be ironic), and then there's the lyrics. Pigface Chant is the best example of the songwriting on this album. It's about a pig-humanoid creature whose kept in a zoo and refused toilet paper. At the end of the song he runs away from the zoo to get his pig dick sucked by cows. If that appeals to you at all then check this album out!