Intensive Care or: Andrew Nolan is fucking at it again 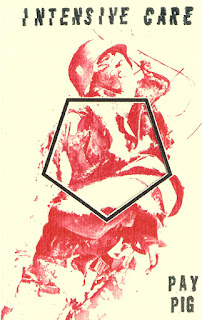 Oh my fucking god. A friend told me that Andrew Nolan had a new band that was even more fucked than Column Of Heaven, and knowing his past musical output (Ebola, Death Agonies, The Endless Blockade, Slaughter Strike...just to name a few) I totally believed it. That was over 6 months ago, probably more like 8 or 9. I've been impatiently waiting to hear this project for all that time; and then the other day, when Iron Lung Records had their most recent update, they included an Intensive Care track and I flipped out -- it was incredible. I had no idea what to expect, which I think is part of why this band knocked me on my ass so hard, but I also know that even if I had known ahead of time, it wouldn't have really prepared me. But now, I'm finally able to listen to an entire release; and holy shit, this project is even better than I could have hoped for.

Okay, I know, enough backstory. I guess I should actually talk about the music itself. It took a minute for what Intensive Care is doing to fully sink in due to how overwhelming their music is, but once it did I knew exactly how to talk about it. The bands I compared it to should give you a good idea, but it's not so much that they sound like any of those bands individually, it's more that they sound like the Eraserhead baby of all of those bands. The power electronics/noise rock hybrid is not something new by any means, but it's something that I feel really captures what's amazing about both types of noise (which would explain why it's what I do in Bloated Subhumans). Rather than feeling contrived or detracting from one or the other, power electronics and noise rock compliment each other when combined, each pushing the other to new heights of depravity and intensity. When it's done well, anyway. And, Intensive Care does it well. Obviously, hybrid bands like Skullflower and Cosmonauts Hail Satan get nods here, but Intensive Care expands on those ideas in a way only those involved can do, and makes them their own. Rather than sticking to The Stooges formula (single riff repeated over and over, championed by Flipper, Brainbombs, etc), Intensive Care goes for the Unsane/Stretchheads approach, which is much more chaotic than the former, but just as filthy. Oh, and they use the late 80s/early 90s grind pitch shifted vocals at points which only adds to the overall menacing atmosphere. This shit is gross.

I got kinda carried away, so here's the short version: big scary noise rock with power electronics like if Dissecting Table, Stretchheads, and Hammerhead were smashed together. So in other words, essential.

DOWNLOAD THIS FUCKER, YOU FUCKER
Posted by Joey at 17:13