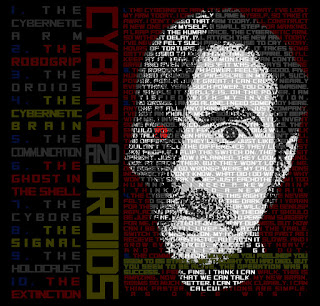 Where do I even start with this one? I was turned onto this by someone on facebook (who as it turns out was one of the members of Drainland) because this is the project of one of the other members of Disguise (another member of Drainland) and countless other Irish bands. This sounds nothing like either of those bands. Rather than the raw aggression those bands deliver, this is wacked out synthpunk and probably some of the best synthpunk to come out since the 80s.

Yea, I know. There's tons of mediocre Screamers, Devo, and Count Vertigo wannabes around right now. Forget about them (no really, please can we forget about them). Cyborg And Droids is nothing like those bands, in fact, they succeed where all of the wannabes fall flat. Instead of being contrived copycatting, this material actually has that genuine feeling of weirdness and willingness to fuck around; and because of it, this comes off feeling fresh. The vocals are totally fucked as well, coming in the form of snarls and howls, rather than the typical robotic voice you'd expect from synthpunk. On top of that, there are dark punk influences aplenty, which really drive the whole thing home. Some of the riffing and atmospheres are reminiscent of "Death Church" and "Only Theatre Of Pain," but overall it sounds like what I would imagine would happen if you combined Nervous Gender and Mannequin Neurose (*evil sounding, but more weird than gloomy)

This came out of nowhere and totally floored me. Plus, there's a song called "The Ghost In The Shell," so how can you go wrong?

Tracklisting:
1. The Cybernetic Arm
2. The Robogrip
3. The Droids
4. The Cybernetic Brain
5. The Communication
6. The Ghost In The Shell
7. The Cyborg
8. The Signal
9. The Holocaust
10. The Extinction