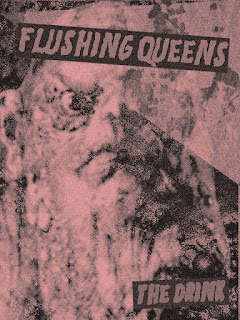 Going through the submissions inbox is tough because there's a shitload of stuff in there. But, I finally sucked it up and opened a couple of the emails, one of which contained this nasty little number. This tape is caustic, it feels as if its dripping with what I would only assume is toxic waste and scum. If you want real mutant punk (and I don't mean boring 80s punk wannabes with leather gloves), you're going to want to check this out.

The first track opens with disgusting low end feedback and explodes into blown out, stomping filth accompanied by dissonant guitar work, buzzsaw riffs, and vocals that sound like what you'd expect from the sewer dwelling Morlocks. This thing does not let up either. Each second of this less-than-six-minutes tape is overflowing with vile energy and intensity. The way this whole thing comes together really makes it stand out from the overwhelming amount of bands trying to pass themselves off as "freaks" and "mutants" because it actually feels as if it was made by freaks and mutants (unlike most of these bands who heard Gag and Glue and decided to play caveman drums). Oh, and I should mention this is from the UK, and based on the UK stuff I've posted here recently, that should have you clicking download already.

In the submission, they said they have an LP dropping in the next few months, so I'm really looking forward to hearing that. Expect to see it on here when it comes out and listen to this on repeat until it does.

Speaking of freaky deaky punk, another submission was an email from Vacant Life (formerly Wet Brain, reviewed by Brayden earlier this year) asking if we'd heard about their new 7" on Iron Lung Records. Being the nerd I am who checks ILR's bandcamp at least once a week for updates, I did know about it. Unfortunately I can't do a formal post about it on here because it's not a free download, but I highly recommend you guys check it out anyway. Now I just need to hop forward in time a month so I can hear the Condition LP, and that Cadaver Em Transe EP. Also excited for the new Dreamdecay LP and that Behavior LP. I'm gonna stop before I start drooling.
Posted by Joey at 14:49