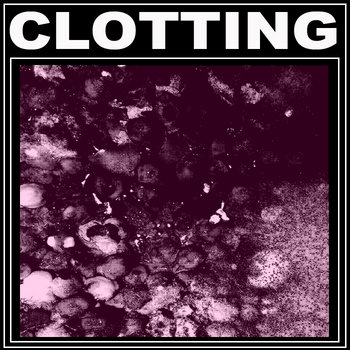 I can't decide whether it was the True Detective sample that opens this release, or the bastardization of Take My Breath Away on the closing track that cemented by firm approval for Clotting's brand of power electronics. This four track cassette from the Chicago based project contains quite a few samples, such as the aforementioned two, as well as some uttely ferocious walls of fuzz and distortion, and powerful vocals thrust straight to foreground. The vocals sit very highly in the mix, sometimes receding into the pulses and swashes of the background noise, and divert time between a more standard bark/command and beefy gutturals, not too dissimilar to that of Eric Wood's subterranean growl. The noise on the other hand sits somewhere between straight up harsh noise walls,  interspersed with a manner of distorted squeals, wails and synth pulses. All together it's a fairly minimal, primitive take on power electronics, composed in a manner that allows the vocals and samples to form a narrative. Simply put, it's a well constructed monolith of sound that also happens to be collapsing on your person, and will surely crush you and your precious vital organs with it's static-y girth.