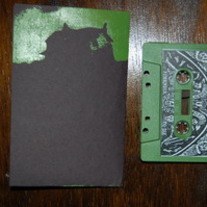 'An ungodly miasma of noise'

I'm fairly new to this whole Black Metal thing, and while I'm still trying make sense of the vast catalogue  of BM releases out there, I've found some pretty neat stuff.
Enter House Of Apparition's 'Spectre Tape'.
This bad boy was limited to 100 copies (according to Discogs) and is a fine example on how to make 'listenable' raw black metal. These guys play USBM with slight punk leanings that is both primitive and gloomy. House Of Apparition don't spend a great amount of time creating intricate soundscapes or atmospheres, rather they let the horrendous cacophony of their instruments produce a hazy, distortion ridden racket. If you're new to black metal, like me, I'd give this a listen as it's a good introduction to the rawer side of the genre. If not, I'd recommend it anyway, the band really do live up to their name in terms of the ghostly, dark music they create.