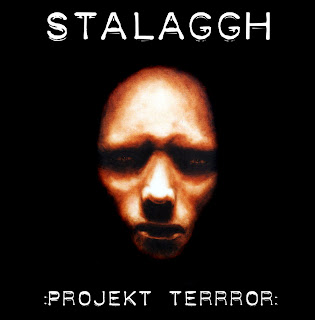 Hey kids! Do you want to hear something that's positively fucked up? Do you want to murder your ears and/or soul?
Well, look no further than this release right here. Stalaggh are a group of unidentified black metal musicians who've basically managed to create the musical (I use that term very loosely) version of a nightmare. Imagine a 30 minute long track comprised harsh noise, some very raw (almost unrecognizable) black metal instrumentation, coupled with the screams of mental asylum patients. Yep, Stalaggh have found the key to unleashing the most terrifying music imaginable, and by having some truly anguished, damaged individuals doing the vocals, there's an air of authenticity to this album that makes it so much more compelling and disturbing. It almost feels like you shouldn't be listening to this, like somehow you're breaking a law or doing something natural or immoral - and if an album can provoke that sort of response, you know it's worth listening too.