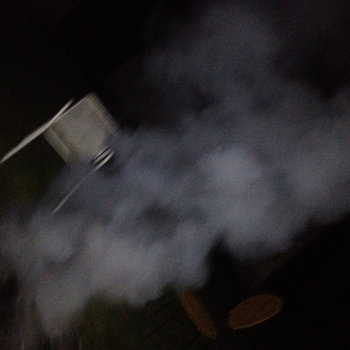 Everyone knows conventional song structures blow, and meticulously structured song writing does get a bit droll after a while but no one knows this more so than Big Fur Coat. BFC are a duo of musicians from Massachusetts, USA who specialize in deliciously abstract noise rock, straight out of the school of free improvisation.
Rituals Laughter is the end result of two dudes getting together and jamming, the sort of atonal, aimless jamming that only someone with an utter disdain for the well being of anyone listening could produce. The guitar lines spit and stutter like a rabies victim, unleashing quick bursts of crazed energy, before leading off into some sort of heinous discordant void, only to come back later and have another go at your jugular. On the other end are the drums, which don't exactly keep the pace (there is no pace), but instead they frollic around in chaotic fills, and compliment the jarring guitar playing with equally unpredictable vigor. It's not just the guitar and drums either, you'll get screams, yells and coughs thrown at you at very random intervals (I heard a can opening too, so there's that).
Rituals Laughter is by no means a track by track album. By itself the tracks would seem out of context and pointless - but as a whole it's a monstrous testament to the noisier side of avant garde music. Just sit yourself down, play this and enjoy the sonic fistfuck that will surely greet you when you press play.

Bandcamp
Posted by Unknown at 05:03