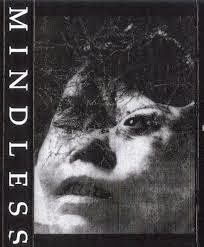 Modern powerviolence done so right, it kinda hurts.
We all know Hatred Surge has kind of been losing their touch gradually after Deconstruct, but alas we have Mindless to fill the void.
Featuring ex Hatred Surge vocalist Faiza Kracheni, Mindless play super heavy, beefed powerviolence, with a bit of grind and hardcore thrown in. Just as chaotic and intense as their fellow PV peers, Mindless also feature one of the gnarliest bass tones I've ever had the pleasure of listening too. There's some monstrous sludgy breaks too, which tend to be overused nowadays, but Mindless pull it off tastefully.
This takes the 'fast and heavy' approach to powerviolence more so than the 'weird and drugged up' one, but the constant barrage of riffs, pissed of vocals and mosh worthy parts will keep you tapping your feet for multiple listens. Dig it below.

Email ThisBlogThis!Share to TwitterShare to FacebookShare to Pinterest
Labels: Powerviolence