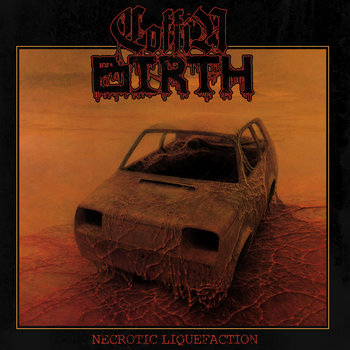 Coffin Birth are a grind trio hailing from my hometown of Brisbane, Australia. I'd actually been blasting Necrotic Liquefaction a fair bit prior to receiving the submission from the band, which was cool - and let me  tell you, this thing does not let up. Clocking in under 10 minutes, with 9 tracks - this is the concise, brutal nailgun grind that Insect Warfare before their untimely demise took them away from us. The usual guttural low/throaty high vocal interchange is at play here, along with insanely catchy riffage, pummeling tremolos and deliciously concise drums. This release hits the ideal spot between intense noisy barrages and slamming passages that'll have you tearing through crowds of innocent bystanders  for sure.
Coffin Birth are definitely a band to keep your eye on, especially if you happen to live in Australia. One of Brisbane's most exciting (and decidedly louder) additions to the musical scene.

Bandcamp
Posted by Unknown at 02:40