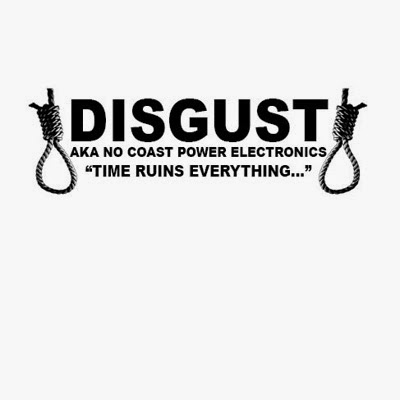 Disgust is one of many projects from Mr. Mackenzie Chami, who you may know from other noise projects such as Koufar, Crown Of Cerberus, Insurgent and Bachir Gemayel. The project features (or featured? There hasn't been a Disgust release since 2011) quite a few different noise peeps on and off, and on 'Time Ruins Everything' (which may I mention was released as a 3" mini CD), Chami is accompanied by a Mr. Thor. J.
Much like Koufar, Disgust features heavily distorted, and extremely harsh vocals, masterfully manipulated with delay and brought to chaotic crescendos - but wrangled in before they collapse in on themselves. These vocals are backed with GIGANTIC, crumbling synth pulses and samples that have all the fancy trappings of
a 'rythym' but preserve the core principles of noise music by being completly and apologetically hostile and atonal. And, as an added bonus there's a pretty good Weekend Nachos cover, which is a vast improvement on the original if you ask me.

TRACKLISTING:
1. Disgust
2. Fueled By Self Hate/If I Could
3. Epiphany
4. God
5. Unforgivable (Weekend Nachos)