Interview with Gabe from Symptom and Human Bodies 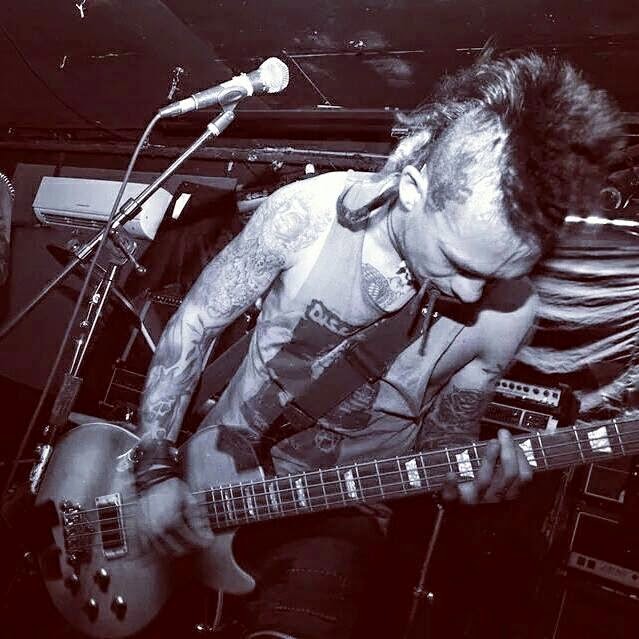 FBN: First off, who are you and what do you do?
Gabe: My name is Gabe. Currently I live in Allston Massachusetts and play in the bands Symptom and Human Bodies. I have been involved with various other failed musical projects in the past.

FBN: What made you want to play music in the first place and what keeps you going when it comes to making music?
Gabe: This might sound stupid but I honestly think it was just genetics. My grandmother was a professional singer. My father played in rock bands when I was younger and now is a touring Celtic guitar player. Pretty much everyone in my family is some kind of a musician- at the very least for recreation. I can't pinpoint a certain reason why I ever picked up a guitar or a microphone or drumstick. It doesn't even feel like it was a conscious decision sometimes, just something I was born to do. Am I cheesy? Yes. Whatever.  Continuing as a "musician", on the other hand, has taken a level of acceptance that nothing I or anyone does with art really matters that much outside of your own personal gratification. I will always feel like I'm not playing well enough or doing music as often as I'd like to -which is a good motivation to improve and work harder- but at the end of the day, honestly, I just dont know what else I would do with my time here! Thats it really...

FBN: How do feel about the current state of underground music right now?
Gabe: I Dont really know enough to have any feelings about it. Ive stopped paying attention really. I know the names of bands that are currently hype in the "underground" but am more interested in listening to Judas Priest and Manowar or Taylor Swift's Red album. Either way, trends and trendy bands will always be coming and going, rising to their fullest potential, falling out of fashion and being replaced by something more repugnant and/or nostalgic; especially in a city like Boston where people are coming and going just as quickly. But thats just how it is. Either way, there is so much old music that I am always discovering and rediscovering and it is always enough to keep me excited about making music. The ever-increasing amount of great new music is just so hard to keep up to speed with. I try but I mostly fail.

FBN: Are you reading any books at the moment? If so what are they and why are you reading them?  Do you have a favorite book?
Gabe: At the moment I am reading The Stranger by Albert Camus. I picked it up while I was still playing drums for Stranger since the book was our namesake. I had tried reading it before but never finished it. So far I'm enjoying it. Very good personal narrative. I dont have a favorite book but I have some favorite authors. Ursula K Le Guin is one that has grown with me from the time I was 12 until now. Her material is so abundant and diverse that I am constantly discovering books of unpredictable depth and subject matter the older I get...so she's been able to stay relevant to me as years go by. In recent years I've also become obsessed with Cormac McCarthy. Such a twisted dude. Human Bodies actually takes our name from a line in The Road!  Also, HP Lovecraft without a doubt.

FBN: How important do you think touring is for a band? Do you have any tips or advice for a young band looking to tour for the first time?
Gabe: Well, again I will harken back to an earlier response. Realize first that nothing you do is important at all. Then, figure out whatever the fuck it is that you actually WANT to do and just DO it. If you WANT to tour, isn't that enough to make it important? If you are asking me whether I think touring is important in reaching some arbitrary goal of "success" then I dont know what to tell you because to be honest, I have no idea what in the fuck I am actually doing like ever. But if tour life is something that seems fun and romantic to you, just do it. You'll figure it out. But hear me out, its not all roses and perfume so do whatever it takes to make it worthwhile. If its not for you then its not for you. If you find that is I am sorry. Good luck and have fun!

FBN: How do you feel about the current state of America in regards to the many recent accounts of police brutality that have been reported and not reported?
Gabe:  I think what we see happening is the true face of our capitalist imperialist society laid bare. These accounts of police brutality are nothing new and our government has been murdering its own civilians for as far back as you could care to look (ie. Philadelphia fire-bombings of 1985). What is really unnerving though is how boldly militaristic the government is becoming as a reaction to protests these days. The level of militarization in civilian police forces is fucking scary and if it wasn't obvious before, it should be now: we are absolutely, without a doubt, a fucking police state. Wake up!

FBN: Care to talk about the latest (and final) Host LP that came out recently?
Gabe: Sure.  The final Host L.P. was recorded last April in two days at Dead Air Studios in Western Massachusetts. As always Will Dandy turned the knobs. Some of the songs are old, some were comprised of riffs I had written that had been floating around since me and Dan started working on the project as teenagers. Most of the songs are new and some were co-written by our other guitarist Casey (now in Death Injection and Youth Funeral- peep it). This was the first and only recording to feature Casey. The recording sat around for so long because, 2 months after laying it down, we decided to call it quits for a number of reasons. Also, I honestly didn't feel very confident about the recordings at all at the time. Call me neurotic, but I felt like we'd lost most of the rawness we had on our first 7 inch and it bummed me out. It took me a whole year of putting it out of mind to be able to finally revisit it and listen objectively. At that point, I finally gave in and agreed to let Cricket Cemetery put it out. Hydrogen Man hopped on and co-released it. I mean, why the fuck not. Its out now and there's nothing I can do about it. Sorry.

FBN: Boxers or briefs?
Gabe: Boxer briefs dude. But if it were one or the other, definitely briefs. C'mon. Youre an adult. Boxers are for kids and make you look silly. If I were heading to bone town with some dude and he took off his pants to reveal some bullshit baggy checkered boxers Id be like HELLLLLL no you ain't no lover. Briefs or boxer briefs. Nothing else.

FBN: Any thing you want to add before the interview ends, any shout outs - anything else?
Gabe: I don't know. I hope I don't sound like an idiot. I'm always afraid I sound like an idiot. But either way. The final Host LP. is out now so act quick and pick it up if you haven’t cuz its super limited and all the money goes to a very good cause.  Also Human Bodies has a new 6 song cassette EP coming out next month which will fucking destroy you I cant stop listening to it so be on the lookout for that.  Symptom also has a new song coming out on a 4-way split 7 inch with a few other awesome bands (Neutron Rats, Paradox, No Tomorrow) and are recording for our first 7 inch EP next month and will continue touring all over the place as much as possible so get into that. And in the meantime check out the Poison Vacuum distro online at: www.poisonvacuum.storenvy.com

FBN: Thanks for your time!
Gabe: Thank YOU!

Links to Gabe’s bands are here:
https://punkisacult.bandcamp.com/releases
https://hmnbds.bandcamp.com/track/harlot
https://ibrokethemirror.bandcamp.com
Be sure to check out that Host lp by the way, it rips.
Posted by Zack Dion at 18:43