Sister Fucker - A Commitment To Excellence 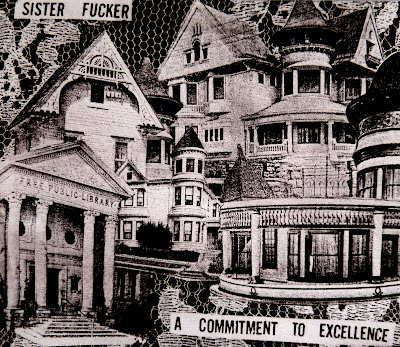 'A Commitment To Excellence'
Sister Fucker
2012

Noise rock is pretty much one of my favourite genres, and I am of the opinion it only gets better when it's as incoherent, dissonant and anti-music as possible. I'm talking guitars that sounds like rusty nails being scraped against rustier guitar strings, non-existent song structures and weird ass-vocals to boot. Anyway, I digress. Point is Sister Fucker is one such band that pisses all over musical convention, and instead presents their own warped take on this newfangled 'being a band' thing. The duo are as minimal as it gets, guitar and drum, yet they coax so much out of their respective instruments it doesn't matter. The warbled vocals and highly unconventional guitar style (think Lydia Lunch levels of six string abuse, and you're about 1/4 of the way there) only add to the glorious confusion. Put simply, A Commitment To Excellence is probably the best headache you'll ever have, and a shining example of how good noise rock can be when it loses the 'rock'.

Email ThisBlogThis!Share to TwitterShare to FacebookShare to Pinterest
Labels: No Wave, Noise Rock