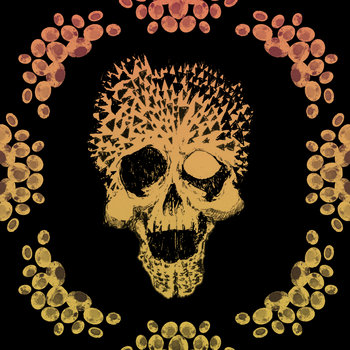 'Happy noise' - it's not really a widely regarded term (or regarded at all), but I thinks it's a pretty adequate for groups/projects such as Fuck Buttons, Black Pus and Black Dice. Bands who've been approaching music from a decidedly 'noisy' angle, while eschewing the usual negative themes associated with the genre and opting for a more electronic sound and even a 'dancier' vibe. Enter Slum Killer, a solo project that's primarily electronic/synth based but with a definite nod to noise and industrial.
Opening track 'Meth Mouth' sounds a bit like Pharmakon playing a nightclub gig - with super harsh vocals accompanying a sleek synth line and distorted, bass heavy beat. 'Claw Hammer' is another track that sounds like you could almost hear it playing in a club, though this club would have to be situated in close proximity to a sheet metal factory, with the harsh metallic drones that fade in and out of the mix. The EP closes with 'Low, a chirpy, euphoric tune with some borderline chiptune-y undercurrents.
My favourite thing about this EP would have to be the fact that I can see a whole range of influences coming into to form something that's familiar, but at the same time vague and new. I'd love to hear some harsher stuff from Slum Killer, but at the same time I'd be totally okay with the happier, electronic stuff. All in all, a solid three track release and a good all rounder.

Bandcamp
Posted by Unknown at 23:09