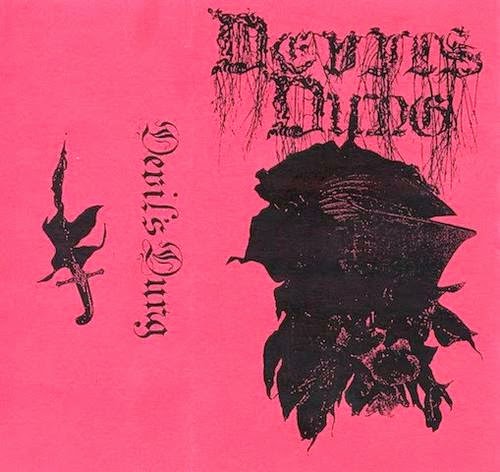 Dom Fernow and Mark McCoy.
Black metal.
Nuff said.
As much as I want to leave it at that, I suppose I should probably say a bit more. Yes, this is a collaboration between that guy from Charles Bronson and the dude from Prurient, yes it's a Youth Attack release and yes it's pretty darn good.
If you like you're black metal raw, bestial and very sinister, chances are this will be up your alley. While it's lo fi as fuck, you'll be able to discern the drums and guitars easily enough, and boy are you in for a treat there - ferocious, galloping blasts accompanied by grim, tremolos and mid paced dirges. The vocals are more on the mid range,  treated nicely with reverb so they float in and out of the mix like some sort of hellish demon swooping at you.
This is the only release by the duo, but at least both of them have plenty of other projects to keep you going. Still, it'd be cool to see them team up again, they are two of the best purveyors of  underground  punk and noise music in the USA after all.

TRACKLISTING:
1. Griezzell Greedigut Is The Name Of My Inmp
2. Daemonolatreiae
3. Nightshade, Uguent Of The Beldame
4. Vomiting Black Hair And Splinters Of Sheep Bone
5. Monk's Hood