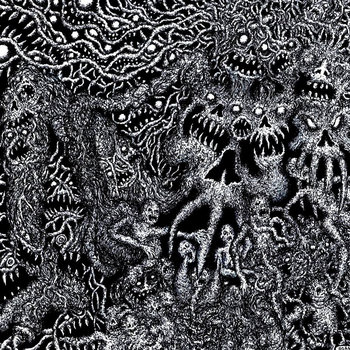 PICK UP YOUR BLACK LES PAULS AND SET YOUR HM-2s TO 11... because this is actually a pretty darn cool release and I'm not going to insult by lumping it into the Entombedcore pile.
Gatecreeper, in addition to having a brilliant name are a band from Arizona who play Swedish flavoured death metal served with a nice crust and a glass of vintage hardcore. Yes my analogies are horrendous.
As you'd expect, the band do have an absolutely humongous sound, courtesy of the razor sharp guitar tone and monstrous drums which are in turn met with steady, Earth shaking bass and the missing link between a 90s death metal vocalist and a gruff hardcore frontman.Rather than boring you with three useless divebomb-ridden, inane guitar solos, Gatecreeper are more than content throttling you with delicious grooves (again with the food analogies, I apologise), be it a main riff or breakdown.  And, I gotta say, I was pretty entranced with the production of this album - it was crisp where it needed to be, and if you closed your eyes, you almost feel the vibrations from the amplifiers seeping into your ears and massaging your brain gently into mush.
I could throw some cliched statement about 'not re-inventing the wheel' or something about 'it ain't broke' etc etc, but I won't. Rather I'll let you find the bandcamp link yourself, press play and take in the maelstrom of dark energy that awaits you.