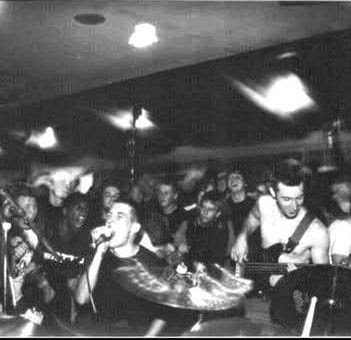 I feel pretty dumb for only finding out about these guys recently, but I liked them enough to gather all their releases into a discography collection, so there ya go.
Puritan were a fairly short lived screamo outfit from Pennyslvania who were active in the mid to late 90s. Combining the best parts of hardcore, with strung out sludge, drugged up powerviolence and chaotic screamo, these guys made the sort of music that could only come out of the 90s. Puritan change things up with their songs, jamming oppressively slow, atmospheric passages together with massively down tuned guitars and sudden bursts of blast beats and shrill screaming. It's too bad people are still to busy jerking each other off over Pg. 99 and Orchid (no discredit to those bands of course), because this stuff here is just ten times more intense and weirder than anything those bands ever put out.
Gathered below for your listening pleasure are everything the band released in one handy compilation, including their demo, their splits with December, Officer Down and Reversal Of Man plus a track they contributed to the From Stars Come Hearts compilation. Go forth and download!