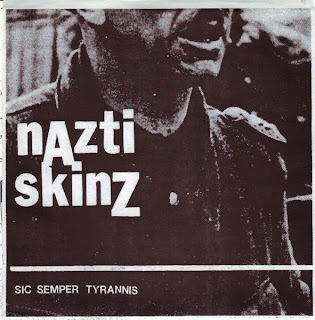 Sloppy and fast.
Not only does that adequately sum up my sex life, but it's also a fair indication of what short lived hardcore band Nazti Skin were getting up to in 2002 with their only release, Sic Semper Tyrannis. I'll  also throw around the 'underrated' and 'short lived' tirade too, because that's kind of true too.
Nazti Skinz play lean and mean, but they also take cues from the weirder, more obscure bands from 1980s hardcore, so there's some weirder elements to the thrashy riffs and pounding bass lines. There's aping the 80s and then there's tasteful appropriation, and I think Nazti Skinz fit snugly into the latter - they're not rewriting the hardcore wheel, but they're playing in a way that feels fresh and invigorating. It also helps that they're not ripping off Boston hardcore - because that stuff generally bores me to tears.