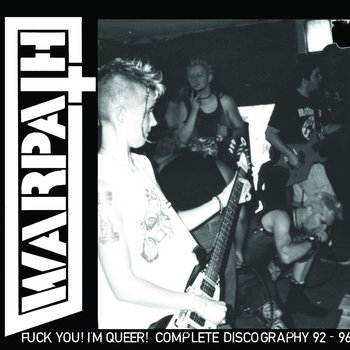 Warpath were a band from Pittsburgh, Pennyslvania who created highly political, socially conscious punk music between 1992 and 1996. While Warpath's music does share similarities with other crust punk bands (i.e Nausea and Aus-Rotten), Warpath's sound also borrowed heavily from the likes of grindcore, with growled and screamed vocals (both male and female), breakneck speeds and unbridled intensity. As per the title of this discography, Warpath did indeed champion queer rights in their music, as well as animal rights, peace, anti-Capitalism and Anarchism.
This discography covers the band's entire studio recorded output, including several unreleased tracks and three covers - including 'Bloodstains' by Agent Orange (which is actually the coolest song ever). Pop on over to the Reality Is A Cult bandcamp and buy the record - or download it below!