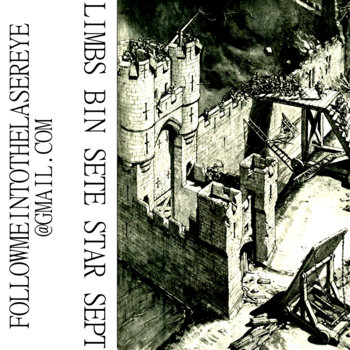 There's a good chance you'll know who Sete Star Sept (7s7) are if you follow this blog, but for those of you unaware, 7s7 are a super prolific, two piece Japanese noisegrind band. Honestly, I've lost track of how many releases they've put out and I'm not entirely sure how the hell they manage to churn out that amount of releases, but hey, I'm glad they do.
The recording on this is a little scratchy, and very heavy on the treble, but  for the most part, I can hear 7s7 journeying into harsher, more improvised territory, with a greater emphasis on pure feedback, wild drumming and absolutely throat shredding vocals. It's a bit tricky to tell exactly what is making which noise given the quality of the recording, but for twenty minutes you'll be treated to the harshest improv jam in the history of recorded improv jams. Neat.
Aaaaaaaaaaand on the flipside, you have one man harsh noisegrind Limbs Bin! Josh Landes has been putting out his style of grind influenced harsh noise since 2008, and much like 7s7's stuff, it focuses very heavily on short, violent and painful aural temper tantrums. Purely electronic, with drum machines, harsh synths and burly vocals, Limbs Bin side is jab after jab after jab of brutal ear puncturing outbursts with these neat little spacey interludes in between them. In fact closing track As Above, So Below is fourteen whole minutes of that weirdo, spacey noise (which is reminiscent of some of Man Is The Bastard/Bastard Noise's stuff).
This is a really cool split by currently two of the most prolific noise groups out there - it's a mixed bag - but it's also pretty fucking harsh. Dig it below.