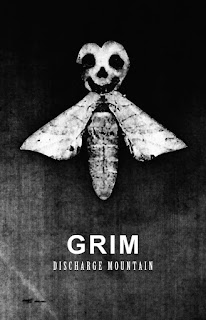 New release from Grim? You know I'm fucking there. When this was announced over the summer, it instantly took a place at the top of my most anticipated releases of the year (I'm talking spot #1 or #2 here). And of course, it didn't disappoint; it's easily one of my favorite things that's come out this year -- no surprise there.

For those who already know Grim's unique brand of industrial, this new material is exactly what you want to hear. And for those who don't, this release (and all of Grim's discography in general) is a thing of both beauty and horror at the same time. There's something truly disquieting about Jun Konagaya's ability to combine uncomfortably serene melodies and atmospheres with devastatingly crushing heavy, harsh electronics and industrial sounds which really puts him in his own league -- nothing and nobody can ever seem to touch him. On Discharge Mountain, Grim brings it all to the table: pulsating rhythms, traditional folk elements, drudging percussion, and veritable tempests of harsh electronics being hurled without mercy; and all of these sounds are held within perfectly crafted threnodies of ritualistic sonic torment.

I've said it before, and I'll say it again: everything Grim has put out is incredible and should be held among the best and most essential industrial ever made. This release is just one more piece of evidence to add to the pile that is an already flawless discography.

Email ThisBlogThis!Share to TwitterShare to FacebookShare to Pinterest
Labels: Death Industrial, Folk, Industrial, Noise, Power Electronics
Newer Posts Older Posts Home
Subscribe to: Posts (Atom)
FEAST YOUR EYES (AND EARS, MOSTLY EARS) UPON FUCKED BY NOISE.
A BLOG FOR THOSE OF YOU WHO ENJOY MUSIC SUCH AS THIS:
- Punk
- Noise Rock
- Hardcore
- Industrial/Power Electronics
- Black/Death/Thrash Metal
- Art Punk
- Powerviolence
- Grindcore
- Post-Punk
- Goth/Deathrock
- Experimental/Avant Garde
And many others!
It goes without saying that we encourage you to purchase physical copies and support the artists whenever possible (unless they're nazis or something).
I've been locked out of the old submissions inbox, so I will be setting up a new one. When that happens, feel free to use that email for all inquiries, requests or submissions, to report a broken link, or if you're an artist/label and you wish to have your music removed from this site.
FACEBOOK