Slug Guts - Playin' In Time With The Deadbeat

Slug Guts are a post punk outfit from Brisbane, Australia, who have been cranking out some dark, gritty tunes since 2009.  While they have a sound that definitely recalls some of the more dissonant, post punk of the 1980s, the deranged vocals (somewhere between Nick cave, Captain Beefheart and David Yow), the saxophone and innovative guitar keep things fresh and interesting. It's a messy brew of oddball sounds, held together by solid bass lines and some pretty catchy riffs - and it all comes together to from an album that has a distinctly 'Australian' sound.

You'll be hard pressed to find a more menacing, evil powerviolence record than this one. On this debut LP, California Love play a nasty-ass crusty grindcore/powerviolence hybrid that just lays waste to everything around it. The songs have the classic start/stop, fast/slow dynamic but boy do they do the slow parts well - they're oppressively heavy, miserable and just plain filthy. It's safe to say that California Love would also make a very accomplished sludge band. You don't see as much of these guys on the net as some of their fellow PV peers, but that's not to say it isn't a fan-fucking-tastic listen. Get it below.

Swing Kids were an excellent mid 90s hardcore band that left quite an impact - though they also left behind a criminally short discography. One of Justin Pearson's many, many, many bands, Swing Kids played angular, dissonant hardcore with intelligent and irregular song structures. This is a collection of amazing tunes that capture the melting pot of genres that was San Diego's punk scene in the 90s. This discography is 9 songs (including a Joy Division cover), and while it's a very short listen, it's quality stuff. I should also point out that the band put out a self titled EP in 2009 with an updated version of 'Situations On Mars' and a brand new track.

Genre/s: Shoegaze, Dreampop
For Fans Of: Nothing, My Bloody Valentine, Deafheaven, True Widow

Admittedly, I'm fashionably late to this whole 'shoegaze' thing. Its been around for decades, and its  had something of a renaissance with bands like Deafheaven incorporating into their post-black metal and MBV releasing a new album, so it was probably about time I checked it out. I was introduced to Whirr by a friend - and while I was not expecting much, my cold, dark heart was moved by the dreamy, warm sonic vibes this EP here put out. I like my music as abrasive and un-listenable as possible, yet I like this. Whirr are a noisy band, don't get me wrong, but rather than channeling their energy into complete audio terrorism, they mould it into this ethereal monolith of sound, with an ebb and flow that just washes over you like thousands of fluffy bunnies. The vocals (both male and female) fade in and out of the fade, and are almost like another musical instrument, contributing to the many textures that make up this release. I get it if you're willing to pass this up - there are no blastbeats or growls or screaming - BUT, if you want to get into the genre, and you want to embrace your softer, more friendlier musical brethren, this is a good place to start.

Genre/s: Dark Hardcore, Metalcore, Sludge, Doom
For Fans Of: Trap Them, Left For Dead, Black Breath, Cursed, Young And In The Way

Taking their name from the infamous 'Well To Hell' hoax, Siberian Hell Sounds are a three piece metallic hardcore band from my hometown, Brisbane, Australia. Embodying the darker elements of hardcore, and borrowing elements of their sounds from the more grim spectrum of genres (black metal, sludge/doom, grindcore etc etc), Siberian Hell Sounds' music should appeal to anyone with an appreciation of heavy music. There's plenty of awesome vocal work courtesy of the band itself and numerous contributors from the local hardcore/metal scene here, top notch riff work that goes from 'kvlt' to 'throwdown worthy' in the bat of an eyelid and a just this cool, dark, menacing aesthetic that I really dig. These guys have plenty of merch up for sale on their bandcamp, as well as a pay-what-you-want digital download of their debut release, go support some awesome talent and snag yourself some brilliant music while you're at it. 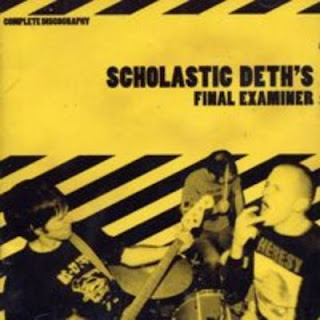 Scholastic Deth were a short-lived, but nonetheless influential thrashcore outfit on the famous 625 Thrashcore label. The band put out some awesome tunes in their one year lifespan, a delicatessen of short bursts of feedback, blastbeats and whirlwind fast hardcore riffs. Backed up by some pretty humorous lyrics ranging from political to morose, bratty and aggressive vocals - this is one discography your collection needs,

There are grind records that floor you - and then there are grind records that take a sledgehammer to your cranium and don't let up until all that reminds of your puny little head is a puddle of blood and brain matter on the floor - 'Subvert The Dominant Paradigm' being one of the latter. Taking cues from the technical brilliance of Discordance Axis, injecting some experimentation a la modern Brutal Truth and ramping up the speed and ferocity by about 120%, Noisear steam roll through this album's 46 minute long run time. The shrieks, growls, blasts and pinch harmonics that make up this monstrosity are made even more impressive by the fact that the band had literally 48 hours to write and record it. Granted that technically only twenty-five minutes of this album are actual songs, but that's probably the best part - they finish the album with a lengthy harsh noise track. As if twenty nine songs weren't enough brutal enough! It's a perfect way to end a suitably punishing release.

Aside from having one of the best names in modern music, Gay Witch Abortion churn out some dangerously fuzzed out, rhythmic, pulsating noise. For a two man group (guitar and drums) the band's output is massive - writhing textures that pound your skull with repetition, psychedelic textures and moments of surprising aggression. 'Maverick' is primarily instrumental - with more structured, riff oriented songs and some full-blown, noise freak-outs.  Bolstered by Jesse Bottemly's weird, floating and powerful vocals and Shawn Walker's tribal drumming, this album comes together superbly. Plug this in, listen to it loudly and zone out.

So Stressed - Attracted To Open Mouths

'Attracted To Open Mouths'
So Stressed
2012

So Stressed are an experimental punk/noise rock band, though that moniker hardly does them justice. On 'Attracted To Open Mouths', the band lay out a veritable feast of genres so varied it boggles the mind. On one hand, So Stessed are an atonal, noisy cacophony reveling in distortion, weirdness and a complete disregard for common musical convention. On the other hand, they're an upbeat alternative rock band, swimming in a sea of fuzz and feelgood vibes. So with these ridiculously diametrically opposed sounds, how does the band keep things coherent? Well they're just so damn good, that's how. Things go from dance-punk to no-wave, to Pixies-esque melancholy to full blown musical nihilism a la Happy Flowers. It's a constantly varying soundscape that'll lure you into a false sense of security and then sucker punch you. I like an album that'll make you scratch your head, and doesn't feel the need to stick to one specific sound, and 'Attracted To Open Mouths' ticks both those boxes.

Bandcamp
Posted by Unknown at 03:11 No comments:

Seth Putnam (R.I.P you crazy asshole) may have been a despicable human being, but his musical output is some unrelenting, repulsive music. Full Blown A.I.D.S is no exception - a beastly concoction of sludgy hardcore and  ferocious grindcore that's delivers a hefty punch to the testicular region. The down tuned guitars and Putnam's unique, polyp inducing scream are a menacing duo to behold, and this one big-ass chunk of sonic filth just waiting to burrow its way into your brain. This here is a essentially a discography (a total of  two EPs, plus an AC/DC cover), snag it below and inflict some damage upon your hearing.

It always makes  my day when I see a band submit their stuff to me, and while I may take my sweet time  (sorry, by the way) getting it up onto this blog, I'm always happy to get some cool new music out there to the masses. ANYWAY, what we have here is some awesome up and coming sonic devastation in the form of Limits, a Straight-Edge hardcore/powerviolence band from Philly. While it's a lo-fi demo, the quality of the material is excellent - 9 punishing tracks of brutality that borrow heavily from powerviolence, sludge (and doom) and classic, meaty hardcore (a la Boston). The raspy vocals are great, the tempo changes from glacial to VERY FUCKING FAST are even greaterer and don't even get me started on the beatdowns they thrown in there.  Here's hoping they release more excellent stuff further down the track.

Bandcamp
Posted by Unknown at 00:33 No comments:

Email ThisBlogThis!Share to TwitterShare to FacebookShare to Pinterest
Labels: Dark Hardcore, Hardcore, Limits, Sludge. Submission
Newer Posts Older Posts Home
Subscribe to: Posts (Atom)
FEAST YOUR EYES (AND EARS, MOSTLY EARS) UPON FUCKED BY NOISE.
A BLOG FOR THOSE OF YOU WHO ENJOY MUSIC SUCH AS THIS:
- Punk
- Noise Rock
- Hardcore
- Industrial/Power Electronics
- Black/Death/Thrash Metal
- Art Punk
- Powerviolence
- Grindcore
- Post-Punk
- Goth/Deathrock
- Experimental/Avant Garde
And many others!
It goes without saying that we encourage you to purchase physical copies and support the artists whenever possible (unless they're nazis or something).
I've been locked out of the old submissions inbox, so I will be setting up a new one. When that happens, feel free to use that email for all inquiries, requests or submissions, to report a broken link, or if you're an artist/label and you wish to have your music removed from this site.
FACEBOOK