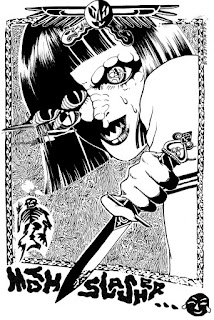 Genre/s: Noise Rock, Post-Punk, Industrial
For Fans Of: Slices, Locust (before the The), Happy Flowers, Walls

Dude, I gotta say...I love when friends' bands are good. That seems like such an obvious statement, but one of the worst feelings in the world is when a friend sends you their band (or worse asks you in person how you felt after just watching a set) and you don't like it, and gotta figure out if you should dance around things or just flat out tell them the hard truth. Well, in the case of Moth Slasher, the hard truth is that they are fucking disgustingly great.

Moth Slasher is kinda hard to pigeonhole, which is something that's always refreshing. My first impression was that they reminded me of The Locust's earliest recordings (splits with Jenny Piccolo and Man Is The Bastard/Noise) sans blast beats, but keeping the industrial/electronics, mixed with Slices. So basically it's totally blown out, filthy, crushingly heavy, and unpredictable; but dirging and rhythmic. But wait, there's more. Moth Slasher manages to make nods to one of my all time favorites, Happy Flowers. There are parts which just completely fall apart -- seemingly forgoing all structure, and embracing pure musical decomposition -- while still relying on traditional punk instruments as the means for producing sonic mayhem. And what glorious mayhem it is.

So hold onto your hat and watch the valuables...it's going to be a bumpy ride.* 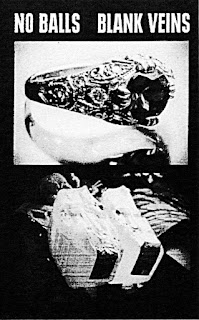 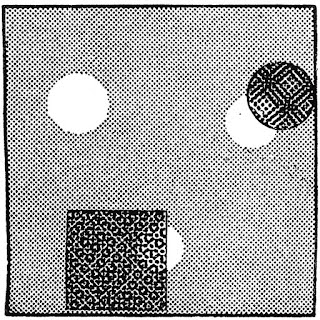 Review by Joey (is anyone else even doing this anymore or am I all alone in this cruel world?)

I don't even know where the fuck to start with this LP. It is, without a doubt, one of the coolest things to come out this year. Or really in recent memory, honestly. When I clicked play on LVEUM's bandcamp, I was not prepared at all, and I don't think anything I say in this review can fully prepare any of you. It's not only that it's really that out there, but it's also that fucking good.

Anxiety is a new band out of the UK -- no surprise based on how much truly interesting shit (No Form, Perspex Flesh, Frau, etc) has been coming out of there in recent years -- who feature members of The Lowest Form (another favorite) and others. But I'm not sure that really has any significance in terms of how this sounds. Anxiety sounds like...well...anxiety -- yea yea, I know it's corny. Their unique blend of all those various genres I listed above is an unstoppable force of nervous energy; like a sonic panic attack. Everything about what Anxiety does has a touch of madness; even the more straightforward (relatively speaking) hardcore punk leaning tracks reek of influence from oddball bands like Feederz and Saccharine Trust. Add in the early SPK and Monte Cazazza-style electronics, The Ex and GRRR-style art punk, dark and ominous textures, and confusing progressions...and you still probably can't imagine what this sounds like. The best way I can even semi-accurately describe Anxiety is that they sound like a hardcore punk Minimal Man. And how fucking sick is that?

I listened to this ten times in a row the day I heard it. And I'm still playing it over and over and over. If you don't download this immediately, that's a moral decision you'll have to live with for the rest of your life.

EDIT: The parenthetical is a joke referring to how I'm the only one doing reviews on FBN anymore, not a cry of desperation.
Posted by Joey at 20:42 17 comments:

Email ThisBlogThis!Share to TwitterShare to FacebookShare to Pinterest
Newer Posts Older Posts Home
Subscribe to: Posts (Atom)
FEAST YOUR EYES (AND EARS, MOSTLY EARS) UPON FUCKED BY NOISE.
A BLOG FOR THOSE OF YOU WHO ENJOY MUSIC SUCH AS THIS:
- Punk
- Noise Rock
- Hardcore
- Industrial/Power Electronics
- Black/Death/Thrash Metal
- Art Punk
- Powerviolence
- Grindcore
- Post-Punk
- Goth/Deathrock
- Experimental/Avant Garde
And many others!
It goes without saying that we encourage you to purchase physical copies and support the artists whenever possible (unless they're nazis or something).
I've been locked out of the old submissions inbox, so I will be setting up a new one. When that happens, feel free to use that email for all inquiries, requests or submissions, to report a broken link, or if you're an artist/label and you wish to have your music removed from this site.
FACEBOOK