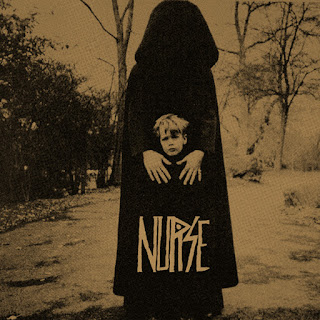 I stumbled across this band's demo on one of my journeys through bandcamp  (or as I like to call them "experiments in pain tolerance") and was totally blown away. I wasn't sure how I hadn't found it last year, although to be fair it did drop in mid December and as an internet only release; it wasn't until this year that it was put out as a tape. And even then, not many people seemed to be in on the raging tunes these dark punks were unleashing on the world.

Not to be confused with the ever-important Japanese hardcore punk band The Nurse, this particular Nurse hails from Atlanta, GA, a place I had not really considered to be a thriving hub of punk activity. Turns out my ignorance could not be confused with bliss, as I am far better off knowing about some of what's coming out of that area at the moment (that band Uniform's demo is ridiculous). Anyway, Nurse plays a combination of raw punk and deathrock which they have labeled "funeral hardcore" [EDIT: turns out this is meant as a joke label, probably in the same spirit as In/Humanity's "emo violence"]. The rhythm section sounds like something you'd hear on Crucifix's "Dehumanization" which is something I'm always happy to hear, but the guitar work and general aesthetic are straight out of something that would be found on The Smartpils' LP or Part 1's "Funeral Parade" EP. Conceptually this can be likened to stuff like Perspex Flesh, Blank Spell, and Bedboys (the latter of the three is definitely a good reference point), although I wouldn't see it fair to compare these bands as they all expand on the same ideas in different ways.

If I haven't convinced you to check this out yet, then you're probably a total geek. I caught these guys live last week and they were fucking amazing; while I'll admit this 7" doesn't fully capture just how intense they are live, you'll be able to get a pretty solid idea. It's 2015 and dark punk is finally getting some new life.