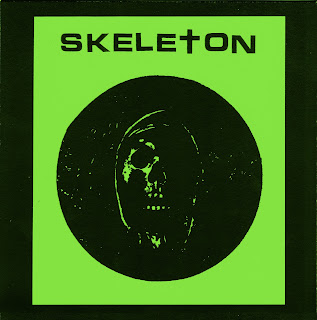 I've been seeing good things about this flexi all over, but somehow there isn't a single rip of it out there. Well, I got my hands on one after going to see Skeleton with Blank Spell; unfortunately no one else (aside from a couple friends, one of whom had flown in for Philly Shreds) showed up. And after spinning this flexi, I'm even more let down that the gig fell through, because this material kills.

Skeleton plays some gnarly riff driven hardcore punk; a style which I love, but also a style which is becoming harder and harder to pull off due to the total oversaturation of bands who are trying to sound like Rudimentary Peni. Fortunately, bands like this one exist to get it right. The serpentine riffs feel as if they're too long as they wind their way through the mix, but instead of progressions which are seemingly all over the place, Skeleton strips things down; and it's this primal simplicity which puts them way ahead of many of their peers. Combine that with abrupt tempo shifts, crushingly brutal and heavy atmospheres and production, and snarled one-line lyrics -- and you've got yourself a winner of an EP.

They said they'd be coming back around later this year, so I'm really looking forward to actually getting to see them. But until then, I'll just be replaying these nasty numbers again and again.