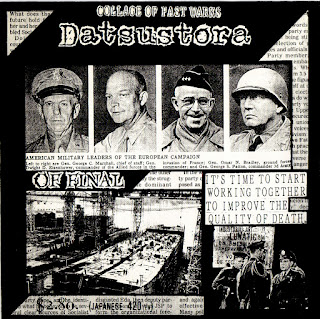 Okay, so you're probably thinking "holy shit, that's a lot of genres, what could this even sound like?" so just sit tight and I'll do my best to explain. There are four tracks, two of them are industrial/noise tracks; and they are sandwiched in the middle of two deathrock tracks, which act as bookends of a sort. Each track is absolutely punishing, twisted, and truly dark in a different way, yet all four still form a whole.

Datsustora was the project of Elle (a.k.a. Achy) from LSD, the legendary Japanese hardcore punk band of ADK Records fame, and the less well known industrial project Criminal Party. This project, however, does not have nearly the level of notoriety of LSD, but I'd argue it's much better (and certainly much weirder and multifaceted). The rest of the lineup remains a mystery as far as I can tell -- aside from a brief run with Yoshimura Hideki, also of LSD fame, on guitar -- and was most likely a revolving door, quite possibly as multifarious as the music itself. Musically, this flexi is as I described (half deathrock, half industrial), but the varied nature of each track -- starting with bouncy dark punk, transitioning into two tracks of unsettling ambient, heavy electronics, and rhythmic industrial, and then closing with a track which feels like the joyful embracing of despondency through post-punk -- really adds to how strange this thing is. It's one of my favorites and there's a good reason for that.

This is a wild ride from start to finish, and I feel it should be essential listening for both industrial and post-punk fuckers. Highly, highly recommended.

Tracklisting:
1. Untitled (apparently there is a title, but it's in characters nobody can read)
2. Datsustora
3. Of Final
4. 幻夢円舞曲