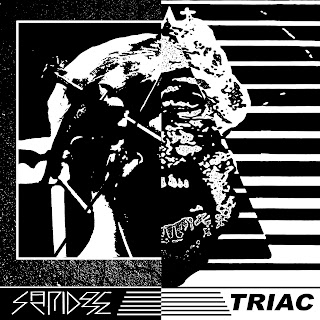 I have been waiting for this split for a few years now. It was originally intended to be a split between Triac and LA's powerviolence saviors Lie Still, but the latter broke up before things could come to fruition. Fortunately, FL's Sacridose were there to pick up the slack and fill out the other side of this hyper aggro, blasting rager of a split.

I'll start with Triac, because people seem to be more familiar with them. If you already know them, you know what to expect, so just sit back and get ready for the ride. For those of you who haven't heard Triac, the best way to describe their sound is a fusion of gritty 90s grind (Flesh Parade, Benümb) and noise rock (Cherubs, Big Black) which results in some of the most disgusting grind you've ever heard. This release is somewhat different from their last release -- the 2012 split 12" with Disciples Of Christ -- which veers more into noise rock territory; on this split, Triac has opted to dish out three tracks of relentless grind with more emphasis on the aggression and less on the weird. Don't worry though, there's still plenty of dirty, crushing destruction here to keep this material sounding like the Triac we all know and love.

Sacridose is relatively new, having put out their first release in 2013, but feature members of recent notable FL grind band Cellgraft. Their sound seems fairly straightforward on the surface, but there are some subtleties in the mix that really give them an edge. A lot of the riffing sits in a weird place between 00s Japanese grind like Gate and Realized; and early 90s deathgrind like Multiplex (who also happen to be from Japan) and Nuclear Death. Drawing from these two strains of absurdly aggressive grind, Sacridose rip through their six tracks with an unceasing intensity and sense of urgency. There's not a whole lot of new grind that can get me super excited, so this is a band I'm going to be keeping an eye on.

But blah blah, get to the download, gotta go fast. I got you.