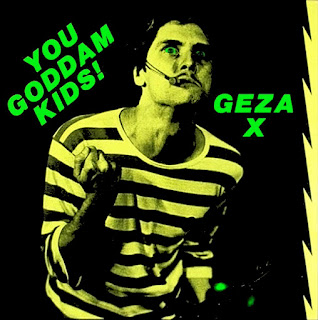 Can someone explain to me why people are going wild over bands who are nothing more than cheap imitations of late 70s/early 80s freaky punk, but somehow don't know who these new bands are ripping off? I'll do my best not to shit talk bands like Coneheads in this review, but I can't make any promises.

So, Geza X was super important. I mean really important. He was an LA record producer who worked the sound at the legendary Masque club and is responsible for some of your favorite punk records from bands like Germs, Dead Kennedys, The Bags (who he played in), Modern Warfare, Weirdos, The Deadbeats (another project he played in), and Black Flag.

Even with all of that under his belt, Geza also had a band of his own which, in my opinion, was also incredibly important. His band, named for himself -- although also sometimes billed as The Mommy Men -- put out some very bizarre punk which utilized synths, keyboards, saxophone, marimba, and several backup singers. You can probably imagine this is some weird shit, but you need to hear it to fully understand. Some of these songs have an almost industrial feel to them, some sound like demented new wave, and others are akin to commercial jingles you would hear in hell.

So forget about that shitty demo tape of whatever derivative band (who are missing the point) that people are raving about and listen to the real thing. Sci-fi sunglasses and leather gloves don't make you a freak, you're exactly the type of people that the bands you jock were making fun of. Now get to learnin' you goddam kids!