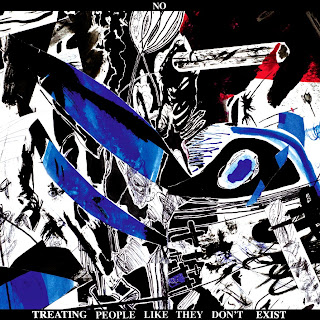 No is a band who I have been incredibly excited about ever since I first heard their 'Great Space' 12" in 2013. I was absolutely floored by their combination of unpredictable structures, unbridled aggression, and oddball atonal riffs. I've been waiting impatiently for new material, and when I saw this on the La Vida Es Un Mus bandcamp I think I actually leapt out of my chair in elation. I clicked play and was blown away all over again.

A little background: No is part of the most recent wave of hardcore punk from the United Kingdom which has given us a roster of bands whose music is incredibly refreshing. Some other bands included in this wave are Perspex Flesh, The Lowest Form, DiE, Snob, Frau (who are more no wave inspired than hardcore punk inspired), and Mob Rules. In my opinion, the UK has one of the best hardcore punk scenes in the world right now. Furthermore, this 12" (and No's other two 12"s) is the epitome of what this scene has to offer (followed very closely by the material put out by Perspex Flesh and The Lowest Form).

So, what about No sets them apart from their peers? No utilizes erratic timings and off kilter riffing coupled with total stomping, blown out fury. I've seen them compared to Die Kreuzen a lot which baffles me because Die Kreuzen, at least for their self-titled LP were mostly just fast and kind of thrashy and a little gothy at some points; not much weird, atonal work on there except for some of the guitar parts I guess, but even then it's nothing like this. This sounds as if the guitar is out of tune, which it very may well be. Rather than saying No is like Die Kreuzen, I'd say they are more akin to an amalgam of the sporadic feel of Negazione's "Tutti Pazzi" EP, the freaky guitar work of Cheetah Chrome Motherfuckers' "400 Fascists" and "Furious Party" EPs, the fucked up rage and twisted structures of White Cross's self-titled EP, and maybe a little bit of the weirdness from Mecht Mensch's self-titled EP thrown in for good measure; that should give you a general idea. And if that doesn't sound fucking awesome, then I don't think I want to be friends with you.