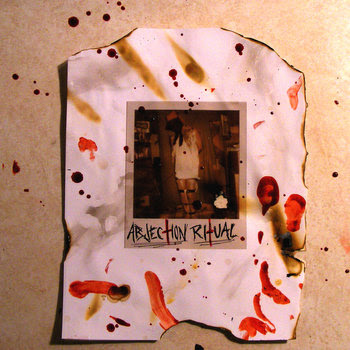 If you're looking for something bleak, noisy and absolutely APOCALYPTIC to ruin your day then look no further, for you have found it here. Abjection Ritual is a solo death industrial project from Pennyslvania, USA, and this here is the stunning self titled debut release.
Abjection Ritual is built around numerous components - synth, noise, samples and vocals - delivered in massive, exquisitely composed tracks. thats tows the line between creepy ambient pieces, and the aforementioned APOCALYPTIC industrial dirges.
Each track sees new ideas and sounds explored - tracks such as Wastrel utilize minimal percussion and vocals pushed to the foreground of the mix, while Haunted Distraction is entirely 'instrumental' and serves as as a chilling soundscape.
As much as I love my improvised noise, there's no denying the power that deliberately composed pieces have, and Abjection Ritual most certainly demonstrates this on this release. Turn this one up loud and enjoy the sounds of the end of the world.

TRACKLISTING:
1. Wastrel
2. Painted Womb
3. Haunted To Distraction
4. A Body Against Itself
5. Thought Hostage