Homage To Nothing - First Failure 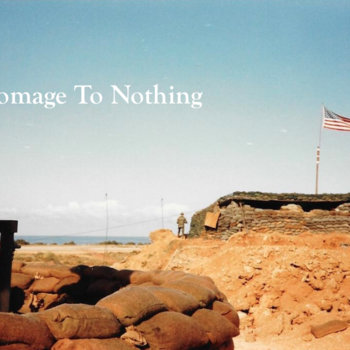 'First Failure'
Homage To Nothing
2014

Homage To Nothing's bandcamp displays a somewhat accurate description for the sounds contained within: 'FUCKED UP DRUGGED OUT LO-FI SPAZZTIC NOISE AND DRUM CACOPHONIES'
Curiosity not quenched? You're not hovering over that bandcamp link button below already? Okay, allow me to elaborate.
On First Failure, Homage To Nothing combines the spaced out squelches and squeals of a synthesizer (a Korg Monotron by the sounds of things) and pairs them with fevered drum blasts. The duo play in reckless unison, joined on and off again by screams and yelps - to great effect. The spaced out squeaks of the synth and harsh drumming barrages may seem like and odd couple at first, but as the tracks progress, the two intertwine, duck, weave and duel each other until some semblance of balance is achieved.
You could say that this is the result of a noisecore album being recorded in the cockpit of a UFO whizzing through the skies in a 60s sci-fi flick - on that other hand it could be the sounds escaping from the mouth of a junkie passed out in his own vomit. Analogies aside, it is an interesting rendition of a genre that for the most part sounds the same, and you'd do well to ingest copious amounts of drugs and check it out.

TRACKLISTING:
1. MOVER OF MOUNTAINS
2. THAT CROW NEVER STOPS
3. I BURNED ALL OUR BOOKS
4. NO ONE MAKES IT
5. DRIVER NOT BELTED
6. DIRGE