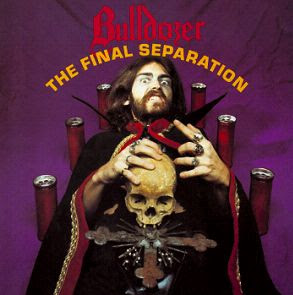 I thought I'd introduce myself here with an album I've been digging a lot recently. This is Bulldozer's second album, and while it's more refined than their debut, The Day of Wrath, it still retains a strong sense of youthful creativity and aggression. Taking influence from the likes of Venom and Hellhammer who were just starting to sow the seeds of proto-black metal in the UK and Switzerland respectively, there is certainly a menacing air around this album that sets it apart from most heavy and speed metal of the era. Don't get me wrong, this is most assuredly a heavy metal album - black metal wouldn't dare have hooks this outrageous - but it is about as far from Saxon and their ilk as one could get within the genre. A minor classic, and, along with Death SS and Dark Quarterer, one of the most important metal bands Italy produced.