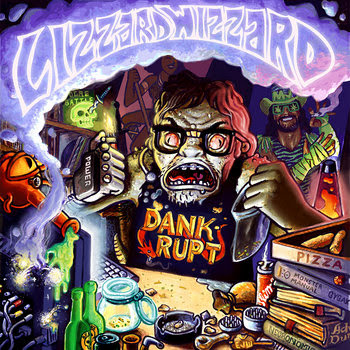 Brisbane's undisputed kings of low brow humour and bone shattering doom riffs are back with a two track EP and it fucking rips (cones).
Much like their self titled debut, Dankrupt balances tongue in cheek lyrics with GIGANTIC walls of fuzz and feedback, played at glacial pace and with just enough menace to offset any misconceptions that may have arisen from looking at the album art.
Delivered in a very similar style to Conan or Sleep's Dopesmoker, the multiple vocalists draw out and layer their vocals on top of the instruments, in a way that adds to the repetitive, driving force behind each track - and while they may be singing about weed induced comas or hirsute wrestlers rising from the dead, it still sounds incredibly powerful.
My only gripe with this release is that it's only two songs long, and not ten, but otherwise it's everything I look for in a sludge/doom release and with its own unique spin of the typical genre conventions.