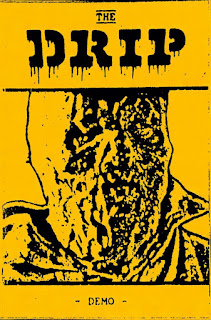 I've been meaning to post my rip of this tape for months (it was in my mid-year round-up!) and for some reason I always get sidetracked or start on something else. No more, now is the time to give you some dirty punk that feels like the musical equivalent of a low budget 80s action flick in which everyone wears sunglasses and leather jackets; and it probably stars Kurt Russell.

At its surface, this demo could be mistaken for nothing more than badass punk with choppy, gnarly riffs, and which makes sure to bring both ragers and jammers to the table. However, there's actually much  more going; weirdly timed drum fills, progressions which seem to change mid riff, a Beach Boys song leading into the first track, and many other oddities all make for a tape that has a lot more to offer than your typical, gritty hardcore punk demo. The Drip's ability to sound strange in a way which doesn't feel forced is something a lot of bands should pay attention to. If something on this tape feels off, it was meant to be that way.