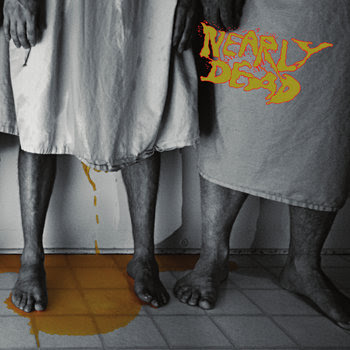 So I have to say I was enthralled, tantalized and just a little bit disturbed when I received a submission from a band claiming to be an 'elderly themed Brainbombs tribute act'. Not surprisingly, Nearly Dead delivered on the promise and I was treated to one heckuva noise rock album. You've got all the staples of Sweden's scuzziest noisemongers - the obscene, spoken-word style lyrics, plodding guitar riffs and the sleaziest, discordant  trumpet accompaniment anyone could possibly hope for. Nearly Dead also add their own few touches to the mix, with a distinctly heavier and bassier tone to their Swedish counterparts, and the sort of guitar tone Steve Albini has wet dreams about. And while a lot of the songs on this album are based on repeating riffs, the (presumably) improvised trumpet 'solos' and noisy guitar interludes prevent things from entering monotonous territory.
Elderly-themed novelty aside, this is an absolutely killer album, and while it most certainly wears its influences on its sleeves, it wears them bloody well.

Bandcamp
Posted by Unknown at 00:28