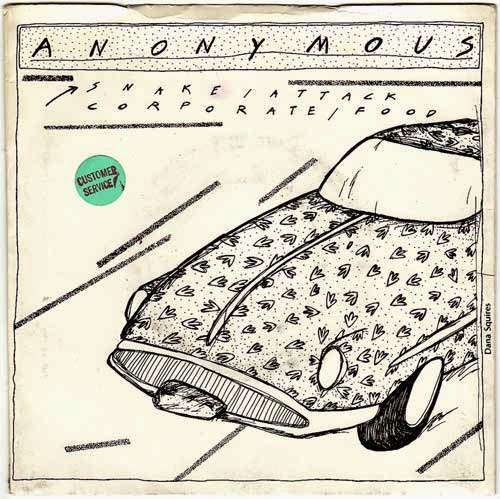 It's always weird to think I knew about industrial/noise artists in high school before I was even into noise.  Anonymous was one of those artists.  I first heard them on Alternative Tentacles's "Let Them Eat Jellybeans!" compilation LP which was released in 1981 to expose people around the world to what they called "America's darker side," which according to the LP's jacket, was not as well known outside of North America.  The A-side of the compilation features American 80s hardcore punk staples such as Flipper, Bad Brains, Feederz, Really Red, Dead Kennedys, and a handful of others; but the B-side is where things got weird (although I guess it was pretty weird from the start since Flipper is the opening band).  On the B-side of this compilation, the unsuspecting punk is assaulted by noise, industrial, avant-garde, and experimental artists, the most notable being Half Japanese, Geza X, and Anonymous.

And that brings us to this release.  This is a very good sample of early industrial and electronic noise. The two songs, however, differ greatly from each other.  While the first is an amalgamation of samples, electronic noise, and synth which feels very much like the The Residents and Throbbing Gristle, the second is much more in the vein of Geza X and Outer Circle (who didn't release their LP until two years after this), in that it leans more towards bizarre art punk which has been heavily influenced by the emerging industrial, no-wave, and noise scenes.

Of course, this isn't nearly as intense as what would come later from industrial/noise artists such as Deathpile and Maconympha, but as previously stated, it's definitely representative of some of the early forays into industrial/noise music.