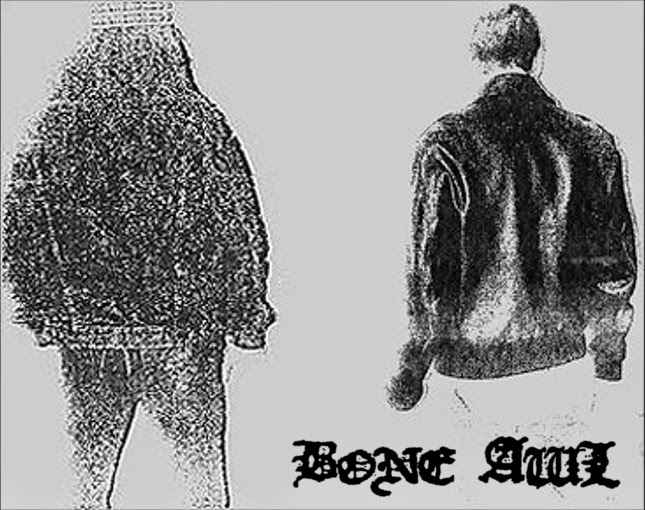 Genre/s: Raw Black Metal, Blackened Punk
For Fans Of: Ildjarn, Rudimentary Peni, Garrotte, Black Boot
You’ve probably heard the name Bone Awl or at least seen some of their artwork floating around the internet.  Let’s face it, their artwork is pretty cool. But their music is just as awesome.
He Who Gnashes Teeth (guitars/vocals) and He Who Crushes Teeth (drums) are the masterminds behind this raw black metal punk assault. They started in 2002 and take heavy influence from bands such as Ildjarn and Rudimentary Peni so you can guess what they sound like.  If you’d like a proper description, their sound is drenched in fuzz and feedback, underneath which can be found simplistic, dark riffing and driving, primitive drumming. These guys helped pave the way for modern raw black metal/punk bands such as Black Boot, Sewer Drainer, and Garrotte.
Both members have gone on to form new projects. He Who Gnashes Teeth put out a tape as Galloping Shadow; He Who Crushes Teeth sings for Raspberry Bulbs.  I’m not entirely sure if Bone Awl is officially over, but to my knowledge they’ve been inactive for a couple years at this point.
So, onto what you’re getting (because that’s what you’re here for, right?).  The link below contains a download for Bone Awl’s entire studio discography. It does not include instrumental/rehearsal recordings or compilations of their recordings; these are all the original releases.
Here we go:
DOWNLOAD