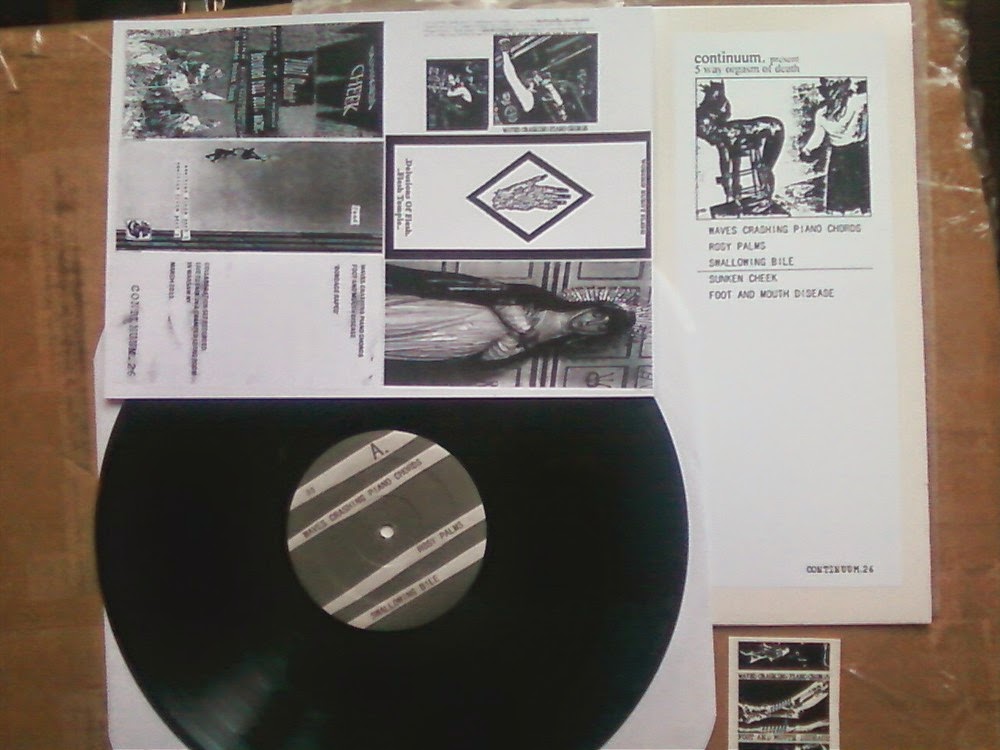 This is an awesome 5 way compilation of sick noise artists from New York put out by Continuum. records. Most of this can't be heard anywhere except for on the record, and it's definitely worth owning. I'm writing this in an artist-to-artist review style, because every artist brings to the table tracks that exemplify exactly what they do best.

Waves Crashing Piano Chords - WCPC gives you exactly what you expect (and want) from him. Piercing mic-to-amp feedback with intense, in your face aggressive vocals. He manages to reach lots of good tones with nothing more than his amplifier. A sample comes in eventually to add nice background to the wall of sound already being pummeled into you. Before you can even get used to the noise, it's already over, ending with a track dedicated to Dennis Lynn Rader (BTK Killer).

Rosy Palms - Haunting voices tease and flirt with each other amongst lo-fi treble and wet, gritty synth lines. This track has a nice ambience through it, yet just enough tone changes to remind you it's still there. It has a very industrial ambience to it, almost David Lynch-esque soundscape at some points. Eventually a noise like crawling insects comes in, along with sound bytes of women speaking about an altar and the atrocities they faced there. Rosy Palms truly put together some creepy noise tracks, keeping you either afraid or uncomfortable the whole time. The track concludes with high pitched feedback and out-of-breath shouted vocals, like the vocalist is almost gasping for life.

Swallowing Bile - Right out of the gate, walls of crumbling harsh noise wall come collapsing down onto you. With Swallowing Bile's recognizable vocals competing to be louder than his own onslaught of noise, this is straight up power electronics done right. If you don't know about Swallowing Bile, you're fucking up. Get on it.

Sunken Cheek - The Sunken Cheek track starts off with a rusty clanging sound and tiny bursts of high-pitched feedback. They continue with more bursts of feedback as a wind like ambience comes into the sound collage that is slowly coming together. Vocals that sound like demons drowning at the bottom of the ocean dance around the feedback violence; this track eventually collapses in on itself and turns to complete fucking chaos. A short and sweet track that's scratchy and abrasive as fuck. Don't miss out on this SC track.

Foot And Mouth Disease - FAMD start off with two short tracks of spacey noise, and then are eventually joined by Waves Crashing Piano Chords for a collaboration track to close out the record. With FAMD on noise, WCPC takes over the track with his signature mic feedback and "Bondage Raped" vocals. For fans of either artists, this is an essential track of two noise titans coming together as one.

BUY THE RECORD
WCPC TRACKS
Posted by Unknown at 18:01