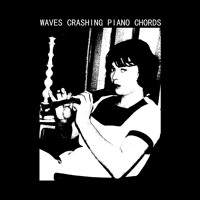 There's violent...and then there's this. Waves Crashing Piano Chords is the power electronics project of Mr. Sean Beard, a noise musician out of Rochester, New York.
Unlike many noise projects around today, WCPC utilises a primitive, almost puristic approach to power electronics, eschewing synthesizers and pedals for a microphone and unholy amounts of feedback. WCPC has taken the creepy, wailing screeches of 1980s era power electronics and brought them to the forefront, without the muffled or drowned out quality of some of those recordings - it's mean, in your face and very fucking loud. With nothing standing in between you and cascading walls of shrill feedback and Sean's gruff, menacing vocals, WCPC are definitely one of the most confrontational and unforgiving power electronics outfits around. Harnessing pure microphone feedback and turning into a formidable weapon may be one thing, but doing in such a way that makes the hair on the back of your neck stand up goes to show that is entirely possible for folks to still create music that elicits such a strong response (as sadistic as this may be).
Young Mouth/It Wasn't Even Worth My Back Seat is out on 7" very shortly on H8 Track Stereo but in the meantime you can either download it here or suss it out on the Waves Crashing Piano Chords soundcloud.

TRACKLISTING:
1. Young Mouth/It Wasn't Even Worth My Back Seat