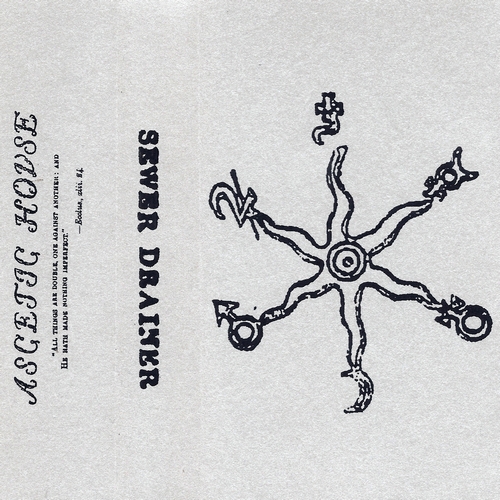 Released in 2012 by masters of the esoteric, Ascetic House, this self titled tape from Sewer Drainer sounds like someone broke the window to a particularly noisy window to hell.
Embracing both the mysterious guy hardcore AND the mysterious black metal aesthetic, Sewer Drainer deliver four untitled tracks of stompy black punk bliss in the foulest, ugliest way possible.
Furthermore, the vocals on this thing are just the most ridiculously unhinged and gnarly barks I've heard on a blackened punk/hardcore release. I mean, the only words I could discern on this entire thing were 'die', over and over again - which speaks for itself really.
Frustratingly enough, this is the only thing Sewer Drainer have done and despite the quality of the tunes encased within IT JUST ISN'T ENOUGH. Rest assured these guys are probably in a hundred other different bands, making some other neat music, but maaaaaaaaaaan I'd kill for another release. Anywhoo, snag this one below and prepare to punch a small child. For satan.