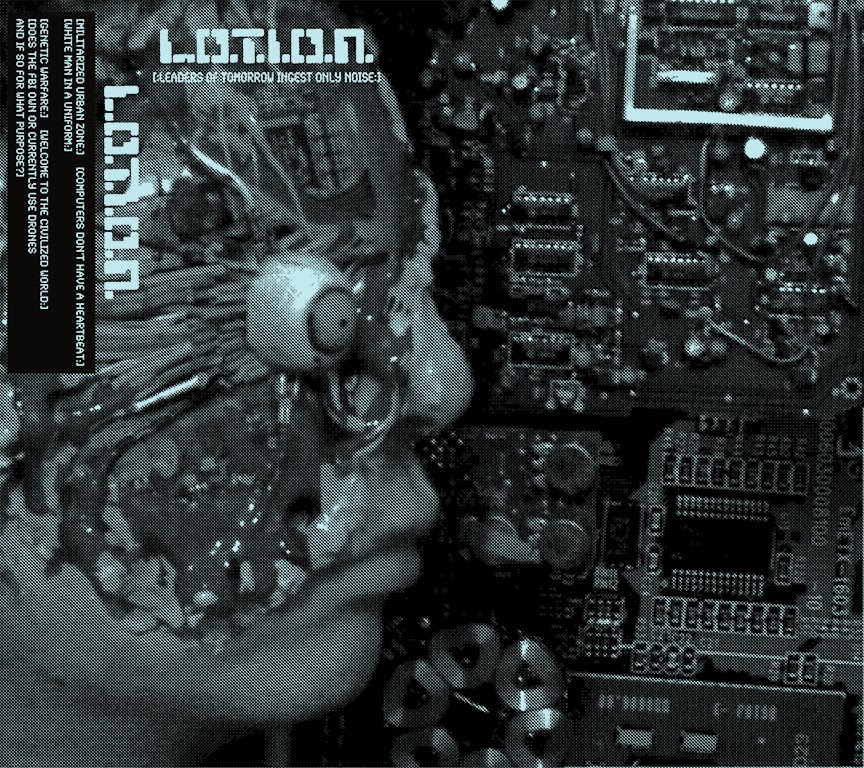 So some leather jacket wearing punk falls into the teleportation device from The Fly whilst holding a copy of Tetsuo: The Iron Man and a battered mixtape consisting of old EBM and industrial bands. The doors seal shut, our punk hero is beamed to the next chamber and emerges as some sort of organic/machine hybrid writhing in agony and screaming in pain. Throw some sort of conclusion onto that and you've got what could've been a fairly accurate analogy for this release from L.O.T.I.O.N.
First Audio Document is the New York band's first demo, and provides an excellent soundtrack to some sort of pulsating, metal and machine fetish club from hell. It's the blown out, distorted drum machines from digital hardcore melded with the feedback blasts and synth noise of industrial, topped off with the aggression and organic touch of punk. Every ingredient here just melts into one glorious lake of static and fuzz, driven on by incredibly persistent percussion and barked commanding vocals.
L.O.T.I.O.N have stumbled into the bleak, John Carpenter-esque future of punk and it sounds pretty fucking cool.

TRACKLISTING:
1. Militarized Urban Zone
2. Computers Don't Have A Heartbeat
3. White Man In A Uniform
4. Genetic Warfare
5. Welcome To The Civilized World
6. Does The FBI Own Or Currently Use Drones And If So For What Purpose?