Howdy y'all. My name is Cody P. I'll be dishing out some reviews here at FUCKED BY NOISE under the name Skulldozer (in reference to the legendary album by Bastard Noise). I'm into a myriad of music genres, so don't get too comfortable.
last.fm
tumblr 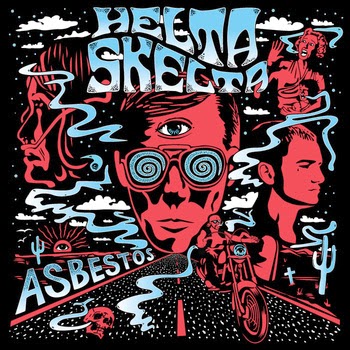 Helta Skelta is a punk band hailing from Perth, Australia that features a fairly straightforward, yet unique lo-fi punk sound. In 2011 they cranked out a solid eleven track LP that would be best described as a blend of surf rock and hardcore punk. Two years later, Helta Skelta returns with a four track 7" titled "Asbestos." The album begins with a mid-tempo headbanger which sets the tone for the remaining three tracks-- distorted, fuzzy guitars, a punching bass, some mean vocals. The instrumentation isn't an onslaught of heavily distorted power chords and typical hardcore vocals, but a nice mix of major chords and a very loose vocal style. The second track, Smile, opens with some Dick Dale -esque tremolo picking giving off a distinct surf vibe, then lays it on thick with some rambling vocals and catchy guitar work. Tracks three and four pick up the pace and hit you with some nasty vocals that feel like the singer is poking you in the chest and firing off his words at you.

Check them out at the bandcamp link below. If you enjoyed the 7", be sure to jam to their LP and download them both for free.