Hey there everyone, I’m Luke Pooley and I am another one of the reviewers that will be featuring reviews/posts here on Fucked By Noise. I play Bass and rip-off Spazz vocals for Frame 313, a bass and drum powerviolence band I share with fellow reviewer Jerry Kahale. I also make harsh noise wall under the name Angel Of Mercy and 7xMONx-esque noisecore under the name of Bum Spew.

I’m an absolute fiend for Powerviolence, Grindcore and Noise/Power Electronics. I also enjoy Hardcore Punk/Thrashcore/Fastcore etc. and Crust. My Favourite bands would probably have to be What Happens Next?, Sea Of Shit, Witch Cult, Water Torture, Neil Perry, Godstomper, Surf Nazis Must Die, Knuckle Scraper, +HIRS+, Dos Amigos, Warsore, The Endless Blockade, Insect Warfare, Waves Crashing Piano Chords, Vomir, Whitehouse, Despise You, Lack Of Interest. I’m always looking out for new PV, so hit me up if you know of any new shit that I might enjoy. 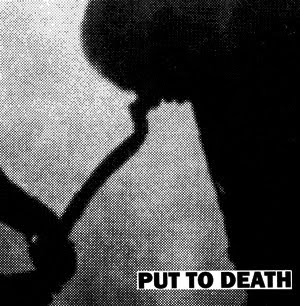 With Alex Hughes (of Insect Warfare/Hatred Surge/Mammoth Grinder/Knucklescraper fame) and Chris Corry (of Mind Eraser/Soul Swallower/Innumberable Forms) forming the brain trust behind this EP, it's hard to not to see how this EP will be an absolute killer. Put To Death's self titled EP (and only EP to date) is pure Infest worship - Brutal powerviolence/hardcore unsullied by any other musical influences; No grind, no noise, no experimentalism, no slow. Just fast-as-fuck hardcore, just how California used to make it.

The 6 track EP wastes no time jumping down your throat with 'Separatist'. This 25 second track sets the tone for the next 5 minutes of your life: Infest-esque barked vocals, blisteringly fast punk riffage ripping pace alongside mosh parts complimenting the pounding drum blasts; with the performance being pulled off here by Alex and Chris being absolutely tight and pulverizing. The vibe pulled from this EP is just menacing; everything sounds so fiercely mean. From the opening sample from The Thing of Kurt Russell yelling ‘Yeah, fuck you too!’ to Alex barking ‘Sick of sycophantic shit’ and everything else contained with in, Put To Death just brutalizes you with blows from their well-crafted hammer and never lets down.
The only disappointing thing about this EP is that Alex and Chris never recorded any follow up material for this project, so this 6 track slab of brutal powerviolence/HC is all we to savor.