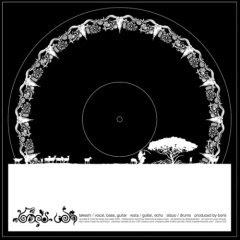 
I love Boris. I really do. They've explored so many different genres in their 21 year old career - whether it be doom metal or J-Rock. Their constant evolution and disregard for typical music is a massive inspiration to me, and this album is an excellent example of their ability to explore new genres. Vein is probably Boris's most noisiest, abrasive release to date and is a homage to their various hardcore and crust influences. Released in two different versions, Vein explored the realm of drone metal, noise, hardcore and crust punk. The drone version features two lengthy tracks, devoid of vocals, drenched in an ungodly amount of feedback and noise. Vein's Hardcore version however features short, noise-punk tracks with harsh, screamed vocals courtesy of drummer Atsuo. All in all, this is a very different kind of release from Boris, not surprising given their highly unconventional approach to releasing and creating music. Vein  is a raw, ugly beast of an album and both versions are well worth your time.