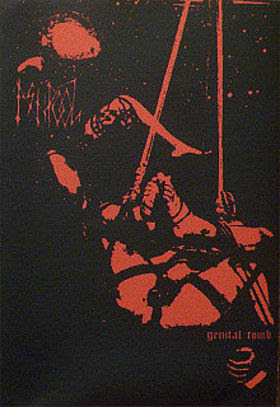 To just get this out of the way, Ash Pool is better known as "that black metal band with that guy from Prurient in it" but he's ("he" being Dominick Fernow) pretty much left behind the crispy, ethereal synths that characterized some of his work with Prurient, and traded them in for the grainy as hell, feedback oriented aspects that he messed with a bit in Prurient as well. Ash Pool is a strange mixture of black metal and hardcore. I mean that because on some of the tracks the instrumentation sounds just like classic 80s hardcore at times (aside from the vocals) and other tracks switch into more melody-based black metal pieces. This is some pretty bare bones stuff though despite the melodic parts, it sounds like it was recorded on a cell phone camera and then converted into just audio later on, keeping with the "raw" traditions of, erm, raw black metal. Fernow also hung onto his affinity for the sexual but in a bit more (consistently) perverse way as demonstrated by the album cover and the title of the third track which definitely made for an interesting listen if nothing else.