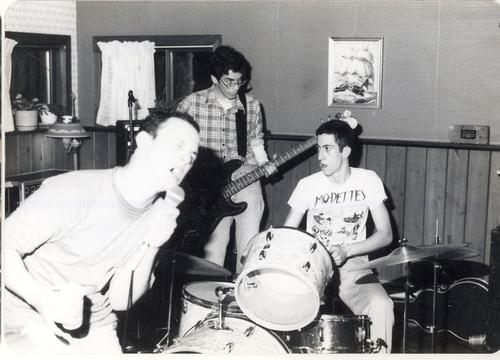 DC will forever be synonymous with the likes of Minor Threat and Bad Brains, and yeah, they're important - but neither of them possessed half the amount of creativity, ferocity and downright disregard for the punk rule book as United Mutation.
United Mutation, much like fellow DC weirdos Void, carved out a niche in their musical scene fairly on - mostly due to vocalist Mike Brown's rough, manic and decidedly unique vocal style. Basically shredding his vocal chords in a manner that can only be described as 'crust punk before crust punk was a thing', Brown surely influenced an entire generation of shower-phobic black clad scuzzballs with his hoarse bellow.
United Mutations music ranged from straight up punk power chord attacks eventually evolving into more experimental and drawn out tracks (SAXOPHONES) - somewhat akin to No Trend's earlier work - all of which displayed their unrelenting aggression and overwhelmingly weird approach to hardcore punk.
Mostly overlooked in their time as band, the band called it quits in 1986. More than likely they were a victim of their odd music - but hey, all the best bands are. Nevertheless here's their discography, and now you can enjoy a slice of DC's oddball hardcore history - everyone knows posthumous band appreciation scores you more cool points.