KDC - The Veracity Of Solitude 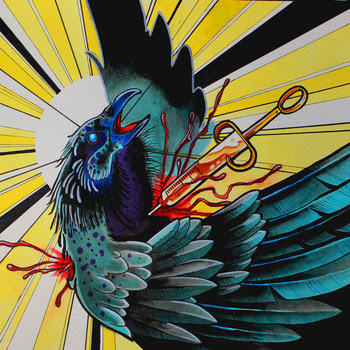 Songwriting, in my humble opinion, will always trump technicality. I'd rather sink my teeth into a meaty riff then hear a twenty scales layered on top of each other and played at light speed. It does however take a certain level of skill to blend both aspects to create technically proficient music, that embraces the hook, structure and melody and turns it into something memorable. This lengthy introductory paragraph does actually have a point, because KDC are one such band who demonstrate this ability with their beefy, emotional brand of modern hardcore.
Veracity Of Solitude's 11 tracks encompass a wide array of influences, with a very heavy metallic slant. The guitar work at times is very reminiscent of early 2000s metalcore, with it's dissonant and erratic riffing and occasional thrashy breakout, while at others it recalls more recent emotional hardcore bands (*cough* Deathwish roster *cough*). Vocally, KDC employ both an emotive and a hoarse, bellow (from two different vocalists, mind you), that interplay with each other and the music very nicely. Together, it forms a band who know that kids want to mosh to massive, chugging riffs and then regain their composure to some slightly more subdued (but just as emotionally sincere) music.
So to tie into my lengthy, opening ramble - KDC do indeed fuse impressive musical skill with the sort of songwriting that makes you tap your foot and/or mouth the words. This, and they manage to sound unreasonably pissed off while doing so, but balance it out with slightly deeper, not-unreasonably pissed off emotions.
Is this sounding like a well rounded hardcore record to you? Yes? Cool, go listen to it at the link below.