Rainbow Of Death - Self Titled EP 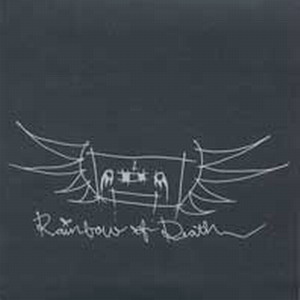 'Rainbow Of Death'
Rainbow of Death
2007

I was lucky enough to catch Monarch! the other day, and holy fucking shit they put on a hell of a show. ANYWAY I was reminded that the members of Monarch! also play in a kick-ass band called Rainbow of Death. Rainbow of Death play a delightfully mismatched style of hardcore that blends the ferocity and intensity of fastcore and powerviolence with catchy hooks reminiscent of J-Pop (vocals and all). And on top of that, they throw in a couple brief moments of surf-y/skate-y punk (a la Dead Kennedys or the Adolescents). If that doesn't sound like the tightest shit, then you're on the wrong fucking site buddy. But seriously, this is by far one the catchiest punk albums in the decade, and it's great if you want something with a bit of bite - but you can still tap your foot along to. Unfortunately this EP is the only thing Rainbow Of Death has put out (and it doesn't look like they'll be putting anything else out), so go snag it and play it until your ears fall off or something.